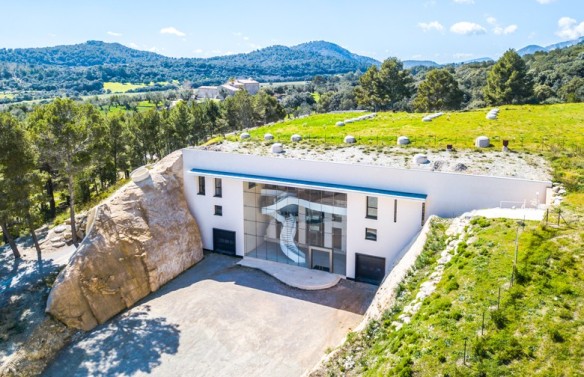 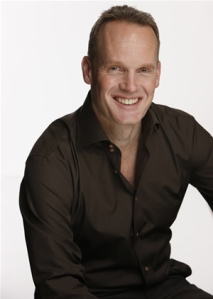 (NM) We switch to English again. I’m very proud today to have another Master of Wine answering our 13 questions at „Nachgefragt @ drunkenmonday“. It’s no other than the English wine writer Tim Atkin! Tim recently generated buzz in the German wine scene by organizing a world wide Pinot Noir blind tasting/battle with selected German participants – with one very impressive result: the German Pinots rivals nearly all of them! This tasting showed again the (world) class of German Pinot on a global scale! To give you a short overview about Tim in person and his daily business, here is a quota from his web page:

I’m an award-winning wine writer and Master of Wine with 25 years’ experience. I write for a number of publications, including The World of Fine Wine, OLN, Intelligent Life and Woman and Home, appear regularly on BBC1’s Saturday Kitchen and run my own wine school in London. I am a co-chairman of the International Wine Challenge, the world’s most rigorously judged blind tasting competition, and have won over 20 awards for my journalism. So far, I don’t have a red nose to show for it…

If you want to know more in detail about Tim’s vitae, check out his web page – this is quite impressive! The ruls for „Drunkenmonday asked“ are still the same: We asked, Tim answered in bold. Here we go.

END_OF_DOCUMENT_TOKEN_TO_BE_REPLACED 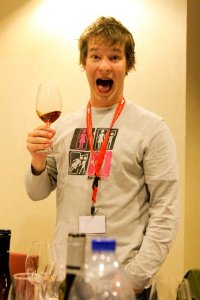 (NM) Viini on kuin luotu juovaan ei maistajaisia varten! Hopefully this English-Finnish-English translator didn’t fail and the first sentence makes any kind of sense (to all the Finish speaking people out there). Anyway. It’s Wednesday again and „Drunkenmonday asks“ delivers with a new episode! Our guest today is the finish wine-video-blogger and founder of ViiniTV Ilkka Sirén. Together with his buddy Arto Koskelo he managed one of the most different wine video blogs in the wine 2.0. If you want to know how Habenero and wine pairs, how to spit in a watering can or what happens when you mix Prosecco and a popping candy you shout seek out this interesting little wine video project. With no suprice, ViiniTV was lately ranked number one wine blog in Finland! Ilkka also started the #fortifiedfriday initiative, to force fortified wines like Port, Sherry or Madeira! Due to the fact that Ilkka is very addicted to traveling, he had some appearance in the German wine 2.0 scene – as a guest of Hendrik Thomas TVino for instance. The logical consequence: his 2 cent now on Nachgefragt@drunkenmonday.

The easy rules: We asked, Ilkka answered in bold.

Today I switch to English again, because I’m very happy to have the lovely and charming Christina Pickard at „drunkenmonday asks“. Born and grew up in the Fingerlakes wine region of upstate New York, Christina moved to London 9 1/2 years ago to follow up with her new love: wine. She worked as a professional actress until she fell in love with the beverage we are all crazy about. Now her life is totally spinning around wine: She works as a wine presenter in the TV (in the BBC Good Food Channel’s flagship show „Market Kitchen“ for instance) and radio shows (Co-Hoster of „the Crush“) and also as a professional voiceover artist, lending her voice to documentaries, adverts, etc. Her wine knowledge is not only proved by her charm and charisma on TV, she also gained certifications in the intermediate and advanced level Wine and Spirits Education Trust (WSET). In the meantime, she travels around the world to discover new and intersting wine regions, speak directly to winemakers to finally get a very deep understanding of all the little secrets around the wine world. A video review of a wine from Giorgio Clai was the reason why I got in contact with her. Anyway, here are Christinas answers and thoughts to our 13 questions. As usual, her answers in bold: 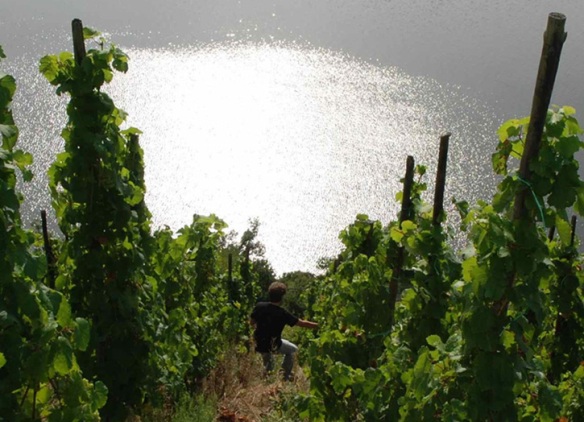 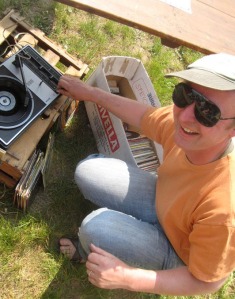 (NM) Maybe you are not familiar with the name Eric LeVine, but you are very familiar with the web page he is hosting : www.cellartracker.com – if not the most important free „wine tracking online cellar managing world dominating“ database in the web. Taken from the web site:

„Since its launch in 2004, registration has grown to 111,000 members. On a typical day, you are tracking (adding or removing) more than 19,000 bottles for a total of 19.2 million bottles. The database includes more than 864,000 wines from 64,000 producers, easily one of the largest in the world. The CellarTracker community has also emerged as an abundant source of wine reviews with more than 1,500 wines reviewed in a typical day for a total of 1,470,000 wine reviews, all written by you, real wine enthusiasts. Peer or ‘amateur’ reviews are not a replacement for those written by professional critics, but you are generating as many reviews in six days as Robert Parker publishes in an entire year. You have created the largest collection of wine reviews in the world, all freely available for the wine-loving community to enjoy. The site is has also become one of the most heavily visited wine websites with 25 million page views per month from hundreds of thousands of unique visitors. The bottom line is that with each new user, CellarTracker gets more useful for everyone. All of this is a testament to the passion that wine inspires and the power of community, core principles of CellarTracker from its inception.“

Impressive stats! Eric is also working on CellarTracker Beta, a new designed frontend of the CellarTracker database, truly wine 2.0. A very interesting (and long) biography about the founder of CellarTracker can be found here. As a real wine and web 2.0 person, we are very proud to have his 2 cent on our 13 questions around and about wine: 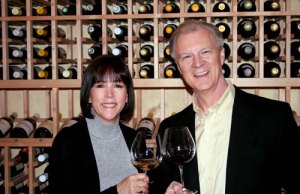 (NM) When it comes to the wines of Burgundy, there is really no alternative in terms of passion, knowledge and excitement to Allen Meadows. He spends more than four months a year visiting, researching, tasting, exploring and evaluating Burgundy! Since 2001 he is publishing quarterly review of the wines out this remarkably area on burghound.com. He is delivering content to the subscribers of his issues in more than 50 countries and nearly all 50 US states. Beside Burgundy, he covers Pinot Noir from Oregon and California as well. Actually, we are very glad to see that German Spätburgunder is getting more and more of his attention at the moment, after he is hosting a tasting in Singapore called „The rise of Spätburgunder – German Pinot Noir the equal of Burgundy“ in April this year. Our thanks also go to Allens lovely wife Erica Meadows, helping us to get in contact with him and finally get Allens thoughts on our 13 questions and statements.

After Jancis Robinson and Mark Squires we are very proud and excited to have Allen Meadows on „Nachgefragt @ drunkenmonday„.

So here we go: Allens answers as usual in bold. 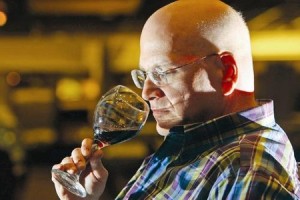 (NM) We switch to English.
„Nachgefragt at drunkenmonday“ proudly presents Mark Squires, a well known and well respected reviewer of Robert Parkers „The wine advocate„. Today, Mark covers the wines from Portugal (the dry ones), Israel, Greece, Lebanon, Cyprus, Bulgaria and Romania. He is also in charge of the Wine Bulletin Board housed on eRobertParker.com. We are more than honored to have his personal 2 cents about wine and life on Drunkenmonday, consolidated in 12 questions and statements below in the blog post. But first, here is a short summary of Marks curriculum vitae, taken from erobertparker.com:

Mark Squires was a lawyer in Philadelphia, class of ’78, although he does not practice much any more. He began traveling extensively in France in 1981. At the time, the only wines he drank were things like Bolla Soave and Mouton Cadet, which he thought was the good stuff (as opposed to favorites like Mateus Rosé). French sommeliers were not satisfied with this state of affairs, needless to say, and insisted that he drink their good wines with their good food. He agreed. In no time at all, hobby turned to obsession.

Mark, formerly the forum leader on Prodigy’s Wine Forum, has been teaching wine courses for over fifteen years, and published numerous articles in various magazines and papers, but his main output became electronic around 1995 when he began his own website. After a few years, he added a popular Bulletin Board, which is now housed on eRobertParker.com. His website attracted international attention, both among readers and other media outlets. Mark sometimes gives and organize wine seminars for local organizations and individuals, and has acted as an expert wine consultant in a variety of matters and circumstances. He has been reviewing wines professionally for approximately a decade, and his reviews have been cited in major publications.

In 2006, he was assigned to cover Portugal’s dry wines by Robert Parker for the Wine Advocate. Mark says that it is still work, but a very different type of work. When he had the pleasure of spending a night in June, 2006 at the home of Jorge Moreira, the highly regarded Poeira winemaker, in order to faciliate wine visits in the Douro, the next morning, around 9:15 a.m., Jorge said, „Time to go to work,“ and brought out several bottles to taste. Mark replied, „This isn’t work. The people who have to harvest wine in the Douro–THAT’S work.“

Beginning in 2007, Mark was assigned to cover Israel, and in 2008 he began covering Greece, Lebanon, Cyprus, Bulgaria and Romania.

Here we go: Marks answers as usual in bold.